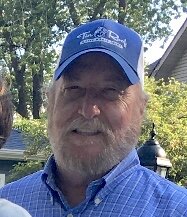 Passed away on his father's birthday age 74, with his devoted family at his side at Erie Shores Hospice. Married to my mom, the late Sue Ann Patricia (Ryall) Field (Oct. 2021) for 53 years. Loving father of Jason (Melissa) Field and Jilliann (Jason Lazarus) Field-Lazarus. Papa of Quinn, Violet, Rylann and Jexi. Dear brother of Marjorie (late Ernie 2013) Gorick, late Charles 2003 (Carol) Field, Gordon (Maureen) Field, Douglas (Judie) Field, and Katherine (late Denny 2008) Benjamin. Dear brother-in-law of Patti (late Nov. 2021) (Ken) Morneau, Patrick (Elaine) Ryall, and Jo Ann (Reynold) Caskey. Also remembered by many nieces and nephews as "Uncle Keys" and his Cottage friends. A very special thank you to Nancy, Ray and Cindy who provided great care and companionship. Cremation has taken place. Honour him by getting together with your family, preferably with a drink overlooking some water. Memorial donations may be made to Erie Shores Hospice or a charity of your choice. You may send your online condolences to www.geraldasmith.ca

Arrangements entrusted to Gerald A. Smith Funeral Home, Harrow On.

I can't really say my dad's luck ran out. He did not have any. As a Superman-loving little boy, he "flew' into his bedroom each night, crashing face first into the sewing machine after a room rearrangement. He repeated his flight the next night, complete with bloody nose because his mom moved everything back without telling him. Growing up, I remember that he would find my mom's lost sewing pins…in his foot. He once also ended up with a screwdriver up his nose. I can't do the story justice. If he was telling it, you would be laughing at his expense. I won't be the only one to miss his funny stories. Now, my brother will carry on the tradition of cutting tension with humour. He did have moderate success with lottery tickets, but I think that had more to do with volume of tickets bought than luck. He suffered with two separate cancers getting all the side effects, usually on a weekend or holiday making access to help more complicated or delayed, but he fought. Even after my mom died, he fought. I am so proud of his quiet strength.

My father was not outwardly affectionate, but he demonstrated his love in many ways. I'll always treasure the excitement I had when he posed my stuffed animals to look like real cats getting into mischief like shredding toilet paper and spilling cereal while I was at school. As a teen, I remember him coming home after work at General Motors as a foreman around midnight with pizza and fries or multiple chocolate bars. He also commissioned a "Quoits" game be made for fun at the lake. I never came close to having his talent at Quoits, lawn darts, pool or horseshoes. He tried to help though. He got quite a kick out of me getting a ringer after he put a fifty-dollar bill on the Quoit post as incentive! He bought little trinkets or treats for holidays and always scanned the newspaper for cool gizmos or gadgets that he thought might make life easier or more fun. He loved Christmas and made it so magical. I'll continue to put up multiple trees in his honour. He and my mom had over twenty. I wish I remembered the actual total (he would) or even had the trees, lost in the devasting fire that took the cottage lake house. More bad luck! Lately, it made me chuckle when he would give me money for visiting him, for "gas" and tell me to be on my way to be with my family (like he wasn't part of it). He was even asking for his wallet at Hospice. Maybe to tip those caring for him? That was like him, never wanting to put people out. He never wanted to be the star of the show, but boy did he deserve to be.

I love you dad and yes, I'll call as soon as I get home.

To plant a beautiful memorial tree in memory of David Field, please visit our Tree Store