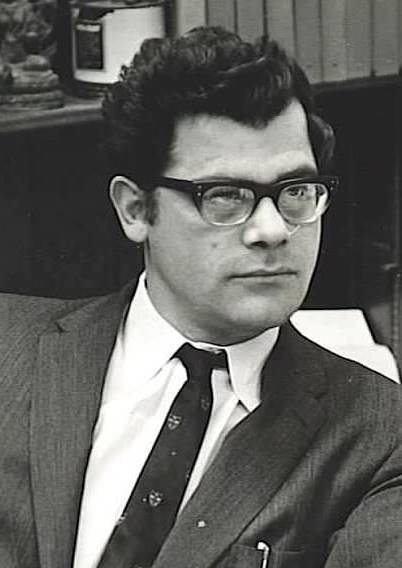 Emeritus Professor John W. Spellman died on June 25 in Ontario, Canada. He was born in Tewksbury, MA. A highly accomplished scholar, he was a Fellow of The Royal Asiatic Society of Great Britain and Ireland (RAS), for scholarship relating to Asian culture and society of the highest level. He retired as Head of the Department of Asian Studies, University of Windsor, Ontario, Canada in 2000. Dr. Spellman is considered one of the world's foremost scholars on Asian Studies and a cultural expert on the political history of India. Spellman studied the history and civilization of India at the Sorbonne, University of Oxford, and the University of London, School of Oriental and African Studies under Arthur Llewellyn Basham, a noted historian, Indologist and author, where he received both his M.A. and Ph.D. degrees.

Praised for his "remarkably original and penetrating mind," his outspoken and dogmatic nature, affectionate sense of humor, charm and dedication to students, Spellman spoke three Indian languages, lectured world-wide and authored books and dozens of articles on ancient India, its people, politics, and culture. He loved independence and freedom, and was an ardent fighter for human rights, social justice and environmental protection. He treasured kindness, scholarship, debate, the pursuit of excellence, gardening, and his students, friends, family and academic colleagues across the world. Spellman grew up in the Boston area, and attended Oliver Ames High School in Easton, serving as Class Secretary, and was active in Debate Club, Student Senate and government affairs. Under the watchful eye of Louise A. Gilligan of Ashburnham, Massachusetts, who he met at 16, he attended Northeastern University in Boston with intentions to become an attorney. While there, he met Dr. Elmer H. Cutts, Professor of History and Government, and Chairman of the Department, who had a profound influence on him. Dr. Cutts ignited a spark in Spellman in Indology and helped him earn a Ford Foundation scholarship for Asian Studies. Professor Cutts wrote to an esteemed colleague, Professor Arthur Llewellyn Basham (1914-1986) at the University of London's School of Oriental and African Studies, requesting he supervise John Spellman for his master's degree. In 1956, Spellman studied at the School of Oriental and African Studies, at the University of London. In 1961, Dr. Spellman was hired as History Professor at Wesleyan University in Middletown, Connecticut. He married Margaret McGregor Thomson (1938-2016). The two met while he was a student in London, when he needed a typist to prepare his manuscripts. Later that year Spellman attended the University of Chicago to study Tamil and other South Indian languages. From 1962 to 1964, Spellman was Visiting Lecturer in Indian Politics, University of Kerala, India. Both of his children, Suzanne Bharati (1963) and John Gilligan (1964) were born at the Salvation Army's Catherine Booth Hospital, Nagercoil, Trivandrum. By 1964, Spellman's reputation as an important scholar in the field of Ancient Indian history was firmly established through his book, Political Theory of Ancient India; A Study of Kingship from the earliest times to circa A.D. 300, published by Oxford University Press. This original work still serves of great value to students of the history of political thought and government throughout the world. While in India, Spellman collected and translated village fables that he read to his children. In 1967, he published The Beautiful Blue Jay and Other Tales of India, with illustrator Jerry Pinkney and Little Brown (Boston). This book was published in many languages and heralded as one of the most important children's books on India. In 1967, Dr. Spellman was hired as assistant professor of History at the University of Washington in Seattle. He taught Asian Studies at the University of British Columbia in Vancouver, was elected to the Board of Directors for the American Civil Liberties Union, and trained Peace Corps volunteers for programs in India. In 1967, he was recruited by Dr. J. F. Leddy, president of the University of Windsor, to head and create the Asian Studies Department. Dr. Leddy became a life-long friend and ardent supporter. Spellman spent the next 33 years there, teaching students and creating a strong academic team that included beloved Professor Dr. Mahesh Mehta (1969-1999) and his wife Vibhutiben and Professor Dr. Kalyan Kumar Sarkar (1970-1997) and his wife Juthika. Professor Spellman served as president of the Institute for Asian Cultures from 1975-2000. In 1979, he married Victoria Lewis. They divorced in 1981. Spellman founded the Indian Cultural Development Centre which was funded by the Ford Foundation and the Government of India, where he worked with over a million people in 400 villages in three South Indian states (Tamil Nadu, Andhra Pradesh and Karnataka) to help each village become self-sufficient through their own indigenous resources. In the 1980's, Dr. John Spellman served as consultant and an expert witness on Sikhism to the human-rights commissions of Alberta, British Columbia and Ontario, as a consultant to the Canadian Ministry of Justice on issues relating to Sikhism, and gave expert testimony for several high-profile court cases (School Boards, Canada 3000 Airlines, American Airlines, Royal Canadian Mounted Police, etc.) in North America. Dr. Spellman was presented the Sikh American Heritage Award 1986 by the Sikh Council on Religion & Education (SCORE) at a ceremony on Capitol Hill in Washington, DC. In 1986, Spellman served as a Visiting Scholar for the Human Rights Program at Harvard Law School, after its founder, Henry J. Steiner, visited him in India. This was a career highlight for Dr. Spellman, and he treasured his time with the Steiner's, beloved friend Holly Bull and his Harvard colleagues. In the 1990's and 2000's, He served as a consultant to the Immigration and Refugee Documentation Centre, Ottawa, the Canadian Human Rights Tribunal, Ontario Human Rights Commission, the Canadian Immigration and Refugee Board and Amnesty International. He served as director of development projects and consultant to Asia for Canadian University Service Overseas, an international development organization that works to end poverty and inequality. All his life, Spellman enjoyed horticulture, organic gardening and being a farmer. Over the last twenty years, Spellman became a fierce environmentalist, working to preserve Carolinian forests, wetlands, plants and wildlife in his Essex County, Ontario community. He took up the Friends of the Marshfield Woods case, and the Big Creek case. In 2013, Spellman was awarded the Queen Elizabeth Diamond Jubilee Medal for his human rights, civil liberties, and volunteer work. John Spellman says he never meant to be controversial. He just always believed it is necessary to speak up and fight for justice.

To send flowers to the family or plant a tree in memory of Dr. John Spellman, please visit Tribute Store