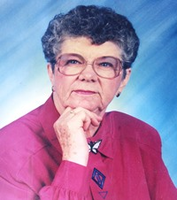 Margaret passed away peacefully at the age 96 at Serenity Retirement Residence in Barrie, where she has spent the last couple years of her life. She was born in Walkerville, ON and lived most of her time in the Windsor/Harrow area. She is predeceased by her husband Harold (1981). Loving mother of Malcolm and his wife Linda, her late son Bruce (2010) and his wife Jane. Dear grandma to Dennis & Janet, Rob & Sandra, Christina & Drew, Greg & Kristine, Jeff & Paula and 10 great grandchildren, predeceased by Brayden (2013). Dear God mother of Bonnie Kondratowicz (Cowley). Survived by her brother Neil Cowley (late Gwen). Dear sister-in-law of Leland (late Doris) McLean, Elwin (late Janet) McLean and many nieces and nephews. Predeceased by her parents Franklin and Annie Cowley, brothers Fred (Beatrice) Cowley, William "Bill" (Ann) Cowley and sister Gertrude (Earl) McLean. Margaret spent 59 years on the farm located on the Gore Rd. Harrow. She loved her flowers, baking and cooking, playing euchre, listening to music and reading. Her favorite hour of the day was early evening watching her beloved shows "Wheel of Fortune" and "Jeopardy." Margaret's faith in God was deep and private. Which she believed contributed to her long and healthy life. Resting at Gerald A. Smith Funeral Home, 197 King St. W. Harrow. Visitation on Friday January 22, 2021 from 10 am to 1 pm. A private family funeral service will follow with interment at Erie Cemetery, Colchester. You may send your on line condolences to www.geraldasmth.ca.